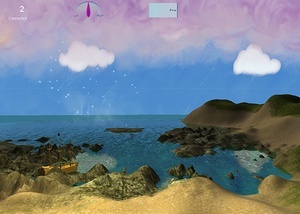 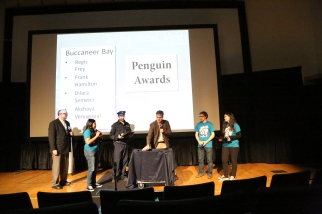 For the last round, we were free to choose our teammates, platforms, anything about the project. The only thing was as it was our last round, we should be implementing something awesome to be shown in the BVW Show. For the last day of team building, we – Frank, Regis and me –  came together with weirdest, coolest, awkwardest, greatest ideas. Those two were up in the air with craziest things and I was the one who had taken the role of the logical and boring.

In the end we decided to implement a duck shooting kind of game with a water gun. There would be real duck targets and in the end there would be a real duck performer running around the audience and people would be shooting themselves while trying to shoot him. When we were discussing these ideas, Akshaya joined in our team and our group reached to the perfect balance.

After some discussions, we decided that we want to implement something that has physical-virtual worlds interactions. We suddenly decided to have some Rube Goldberg machines in our physical world that will stimulate something on the virtual world. Long story short, we ended up with a world like this:

In the beginning of our presentation, we asked the audience to go to the website and by using their smart phones, they could control the direction of the gun by tilting them and it meant shooting when they tap on the screen. The rotation of the water gun turret was achieved by stepper motor. As we had the Phidgets compatibility with Unity 3D, we preferred using Phidgets Stepper Motor Controller. For shooting purposes, we disassembled the gun and get the cables for the trigger and connected them to the Phidgets Interface Kit. However, the current supplied by the Interface Kit was not enough, therefore David Purta suggested us to buy a Relay to put in the middle to amplify it. Thanks to him, we got the trigger working properly.

One day, our little boy finds a chest on the shore after following his treasure map. When he opens the chest, he finds a little ship. It turns out to be the ship of the cursed pirate. He says that the only way to break this curse is to send him back to the ocean with holy water. The little boy puts the ship to the channel and the pirate leads the audience to target the water gun to the triangular target and shoot the holy water. While they shoot the water to the target, it drains the water and fills a tube.

When the tube is filled enough, it falls onto the channel. With the help of the water, the mini-ship reaches to the end of the channel where we have the Makey Makey connections. As we put aluminum foil in front of the mini-ship, it completes the electrical connection and we got the input for the game. At the reaching-to-the-end-of-the-channel moment, the virtual ship comes to the scene.

But this is not enough for the ship to move. The ocean is kind of drained and water level has to be raised. This is done by shooting to the screen. When the water gun is targeting to the screen (which can be detected by the PS Move) and it is fired, we fill the scene with virtual water.

However, the water is not enough. There has to be wind in order to move the ship. We put Makey Makey cables around a windchime and whenever the audience hit the wind chime with water, they complete the connection and this results with virtual wind on the scene. If the water level is enough and there is wind, the ship moves to the horizon line. Then the pirate decides to return back for his treasure! He (Frank) comes out with the hardboard-ship from the right side of the screen with 2 water guns and now the audience has to shoot him. If he gets soaked enough, he gets convinced about sharing his treasure and we distribute our golden colored chocolates. Taa daa!

I got the opportunity to be the programmer in this round. Although we couldn’t meet some of the goals, I am really proud to have worked in this project. We worked with lots of platforms, we connected cell phones to a water gun, we had so much fun while implementing it. We deserved the First Penguin Award and got it 🙂 We had the most ambitious and glorious failure 🙂

Working in this project with this team was amazing. I hope they felt the same, too!

I'm Dilara! I am a gameplay programmer and game designer. I've graduated from Bogazici University as a Computer Engineer and I completed my masters degree studies at Carnegie Mellon's Entertainment Technology Center. I love creating things that make people happy.

I'm currently located in the Bay Area, working at Rumble Entertainment as a Game Engineer and working on KingsRoad with an amazing team!